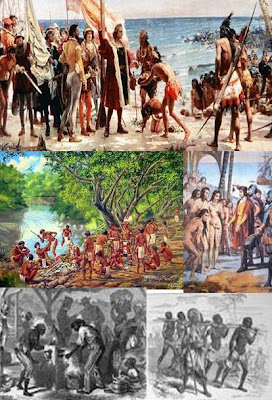 Before the arriver of the Spaniard, Dominican Republic was inhabitate by the Tainos. The Tainos communities were engaged in, hunting and gathering and also in farming and fishing. In 1492 after the Spaniard arrival the Tainos population declined drastically. The main reason for this cause where due to genocide, execution, smallpox and other diseases which were brought to the island by the Europeans.


Christopher Columbus set foot on Dominican Republic (which was called at the time, HISSPANIOLA) in December 5, 1942. This arrives occurred during the first of Christopher Columbus four voyages to the new world.
After the colonization of the Spaniard, African where brought to Dominican Republic as slave. Until this day many scholar believe in the exaggeration of Casas about the decline of the Tainos at that time, it's believe that the exaggeration was due in order to get permission granted to bring more African slave to the country.


The culture of my country the Dominican Republic, like our island Caribbean's neighbors, is a blend of mainly three different culture. Which are, TAINOS NATIVES, SPANIARD COLONISTS and AFRICAN CULTURE. The mixing of these three different cultures is the reason for the uniqueness of the Dominican Republic culture. (Just like the uniqueness of every other culture).
The elements of the Tainos, Spaniard and African, culture are most prominent in family structure, music and religion. Some of the words and names which were use by the Tainos and African at the beginning of the cultures blending are still being use in my country till this day, in daily conversation.
One of the main factors for the cultural mixture in the Dominican Republic started to take place at the time runaway Tainos and Africans start to join together in remote communities.

A research was made in 2010 and was published in the same year, which stated that Dominicans have 15% Tainos ancestry in them and 70% African genes.


The main religion in Dominican Republic is roman catholic, making this evangelical the second religion of choice. Making this a population of being, 68% Roman Catholic, 18% evangelical, 10.6% with no religion and 2.3% other. Religion speaking, the country has two main patroness saints. and this are named- NUESTRA SENORA DE LA ALTAGRACIA, meaning(our lady of high grace) and the second patron name is NUESTRA SENORA DE LAS MERCEDES, meaning(our lady of mercy).
In the 19th century due to a lack of priests, funding and of support programs, the Catholic Church was losing popularity in the population, benefiting this, the protestant evangelical movement. There are rear cases of religion conflict between catholic and protestant in the country.


LANGUAGES= The main languages in Dominican Republic population is Spanish-speaking.
MUSIC= Musically speaking, Dominican Republic is known and recognized for the making of a unique musical style which is called MERENGUE. Not to mention BACHATA.

FOOD= Dominican Republic has a unique sazon, being a mixture of Tainos, Spaniard and African cousin. All I could say about this is that every plate in the Dominican menu is finger liking good.